Overview of the GyroidOS PKI solution 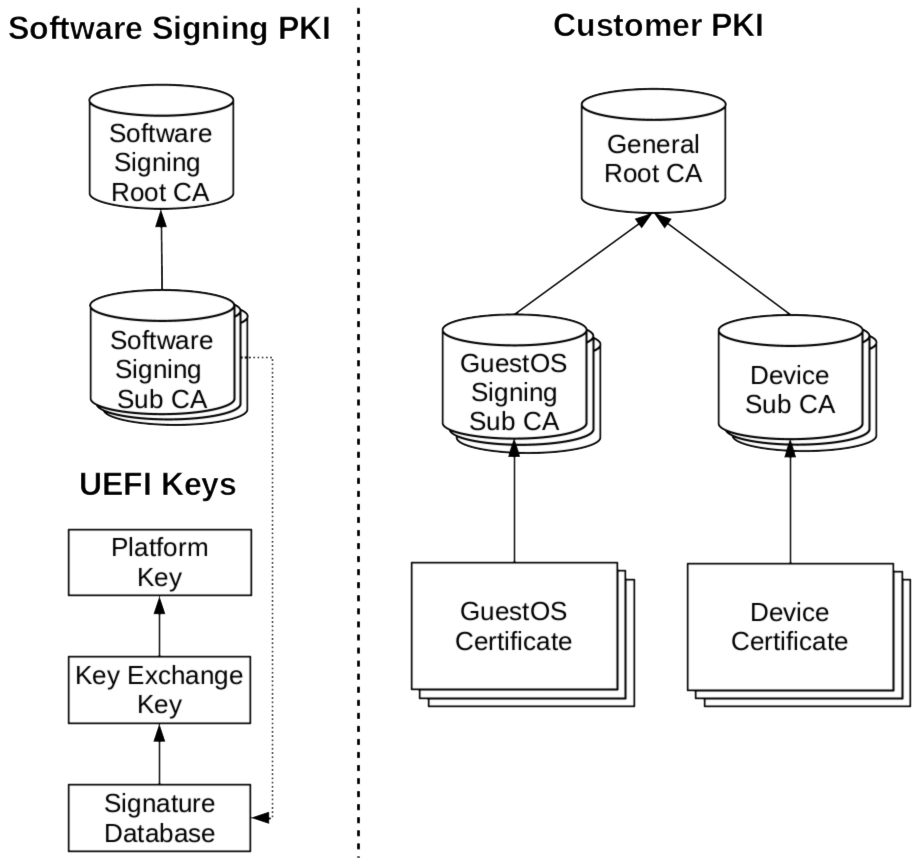 In order to sign all GyroidOS software artifacts and to provide device identities (e.g., for secure remote management), GyroidOS proposes a PKI solution that can be tailored to the requirements of a spefic deployment. This allows the secure operation of GyroidOS regarding device and software lifecycle when operating the PKI properly - an aspect that you need to handle yourself and for which GyroidOS implements the necessary foundations.

The illustration gives an overview of our proposed PKI solution, which comes with to hierarchies. The Software Signing PKI is designated for signing the base system, i.e., kernel, virtualization layer, GuestOS for the core container. The Customer PKI has two purposes: signing the other GuestOSes and issuing device certificates. The term customer PKI expresses aspects the customer wants to control while the software signing PKI provides the core components a customer usually does not want to deal with. In other terms, you might want to build the GyroidOS software stack with your own PKI and have the necessary trust anchors deployed on the platforms to be enrolled. This ensures that only the GyroidOS base system may boot. Before bringing the devices in the field, the party that actually utilizes the devices in its ecosystem, creates its own customer PKI to sign device certificates and to sign its own, custom containers that may only ever run on the platform. In the following, we will take a closer look at the two hierarchies.

The Software Signing Root CA serves as root of trust for the GyroidOS base system software. This CA can create different Software Signing Sub CAs which can be used to sign the kernel, virtualization layer, or core container when building the GyroidOS base system. On a secured platform, the base system needs to be started first and verified during the boot of a device. The illustration exemplifies an UEFI Secure Boot case where the public keys of the Software Signing Sub CA can be stored in the UEFI Signature Database. Note that the UEFI Secure Boot requires to set a platform-individual Key Exchange Key and Platform Key, which is out of scope of this PKI hierarchy.

The General Root CA serves as root of trust for customer-specific (in other words, use case specific) trust relationships, which are currently GuestOS signing and providing device identities. The GuestOS Signing Sub CA can be used to sign the different GuestOSes that are running as containes on the GyroidOS base system. Each GuestOS thus gets its own certificate which can be verified by the GyroidOS base system. The Device Sub CA can be used to issue device certificates. This, for instance, allows a secure communication with a backend.

This part covers the building of the PKI. The deployment of trust anchors and signing of CSRs is covered on the roll-out page.

When building GyroidOS for the first time, our PKI solution is automatically generated from source, if not yet generated. Leaving the solution unmodified, automatic generation results in a development PKI instantiation (possibly not yet applicable for productive use). Especially, this means that private keys are stored locally on the filesystem.

You can also build our PKI solution manually and tailor it to your specific requirements. For instance, you might want to generate/store root CA keys in HSMs, or adapt signing algorithms and certificate attributes to employ the PKI solution in practice. Once signing keys are no longer stored inside the build system directories, you will need to adapt the software artifact signing procedure to use keys, e.g., from HSMs.